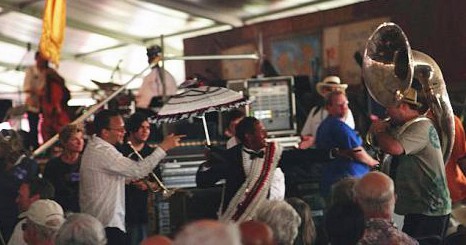 I’m Tim Sweeney and this blog is to support a radio show I’m starting on Monday called Sweeney’s Gumbo YaYa.  I’m incredibly excited as well as nervous.  Nothing like getting what I want and then freaking out about whether I can do it right.

After retiring from a 30-year stint as State of Washington employee on Halloween 2013, I signed up for and took the KAOS deejay training class –which qualified me, upon completion, to host programs on one of the best known and regarded community radio stations in the country. KAOS has been on the air since January 1, 1973 and is located on the campus of The Evergreen State College.  The station uses trained volunteer deejays from the college and the community and offers a diverse free-form radio format.

From the start, I’ve wanted to do a show that would allow me to pursue my love for New Orleans and its music.  I was born in New Orleans and lived there until I was 10.  I went back frequently until I moved to the Northwest 35 years ago and didn’t return until the first Jazzfest after Kartina (April 2006). I’ve been back several times since, always to catch as much music (and food) as possible.

Sweeney’s Gumbo YaYa premieres on KAOS, 89.3 FM (www.kaosradio.org) at 10 a.m. (PST).  The two-hour live program will air every Monday after that.  The show will feature  music from and about New Orleans, including blues, jazz, R&B, hip hop, folk, cajun/zydeco, Mardi Gras Indian, rock, and everything in between-new and old.

I’m hoping you’ll catch all or part of the show as you can and let me know what you think.   I’ll be using this blog to support that show, provide more details, photos, links etc.

See you on the radio.