I use this blog as way to prepare for my radio show on the Olympia community radio station, KAOS. Here’s some of the things I learned this year.

Fascinated by the role of the piano in New Orleans, I started a series on New Orleans piano players that now includes James Booker, Allen Toussaint, Professor Longhair, Tuts Washington,  and Dr. John. (More to follow).

During the carnival season, I explored the traditions and music of Black Indians of Mardi Gras .  That story led me to write about the importance of African American musicans from New Orleans in creating rock n’ roll.  I followed that up with Fats Domino and the role his performances played in getting black and white audiences to dance to the same beat.

My entry on New Orleans women in music resulted in one of my favorite radio shows of the year and helped me grow my knowledge of New Orleans music and the many wonderful women who create it.

I chose my Valentines show to dive into the history of the often recorded “Careless Love.”  Later I looked into the history of another New Orleans standard,  L’il Liza Jane. I also tracked down  songs about “sugar” which, as you’ll find, really are not about sweet granules.  I  also explored the Afro-Cuban connection or what Jelly Roll Morton called the “Spanish Tinge.” (Last year, I wrote an entry on the classic and checkered history of St. James Infirmary.) 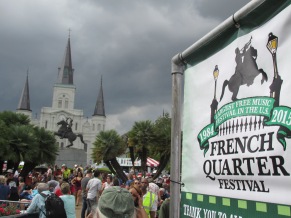 As you might expect, I have several entries on New Orleans institutions, including the New Orleans Jazz and Heritage Festival, Preservation Hall, the jazz funeral,  the Freret Street Festival, French Quarter Festival, and the end of smoking in New Orleans nightclubs.

Drawing on my April trip to New Orleans, I wrote about the magnetic pull of New Orleans to young musicians of all genres. I  also shared my experience of touring the currently closed Dew Drop Inn with the grandson of its founder.

The 10-year anniversary of Hurricane Katrina inspired a couple of entries, including this one that chronicled the activities of some of New Orleans better known musicians. This entry also has links to my two radio shows honoring that anniversary with music and excerpts from Spike Lee’s documentary.

And I finished off the year, as I did last year, with a short catalog of the 2015 New Orleans music releases featured on my show.  Part 1.  Part 2.

Okay I made that part of the song up but therein lies the beauty of the song, L’il Liza Jane. It so engaging and adaptable. Meeting her is definitely on my bucket list. Wouldn’t you like to meet the woman has inspired so many people over the years to sing, chant, dance and make up lyrics on the fly?

According to the Preservation Hall Foundation, the song  L’il Liza Jane “has been established as a New Orleans jazz standard since as far back as the 1910s.” Without doubt, the song was making the rounds before Sherman, Clay & Co. of San Francisco printed it up in 1916, describing it as a “Southern Dialect Song.”

But who was she? One theory is that Liza (and sometimes Eliza) Jane was a common character name in minstrel shows. If so, then its no surprise that her moniker got attached to a simple song that could be easily adapted to whatever dramatic or comedic situation was required.

The simple structure of each line of a couplet set off by a choral response of “L’il Liza Jane” makes it a communal experience where others on stage and audience members can participate.

In true folk tradition, the song has been played in many musical styles from big brass bands to bluegrass pickers, with lyrics added and amended based on the occasion. There is something about the couplet structure of the lyrics that invites embellishments.

The call and response part is easy to follow. No need to rehearse ahead of time, just figure it out as the song proceeds.

Most of the time, the song is about the attraction and joy of having Liza Jane as your life partner. “I got a gal that I adore”  (this is where you sing “L’il Liza Jane”) “Way Down South in Baltimore. “I don’t care how far we roam (Little Liza Jane) Where she’s at is home sweet home.“

Huey Piano Smith, an early R&B and rock and roll performer inspired by Professor Longhair, cut a version of the song with his own set of lyrics but stayed true to the song’s theme.

The Black Indians of Mardi Gras use the song with lyrics appropriate to their unique practices but the response part is still the same –“L’il Liza Jane.”

Another Sweeney’s Gumbo YaYa is coming up on Thursday so imagine that song playing in your head right now (cause I’ll definitely be playing then). I’ll call; you respond.

Or you can listen to the recording of the show on Mixcloud now!