Last week’s African-American Music Month show celebrated the many styles of music generated by New Orleans musicians of color. Just about every genre . . .except for funk. Today’s show is all about the funk starting with The Meters’ “The World Is A Little Under the Weather” from 1971. You got two hours of listening so you best get started now.

When you talk about funk, there’s James Brown (who was inspired by Little Richard’s New Orleans sessions) and then there is The Meters –formed in 1965 by Zigaboo Modeliste (drums), George Porter Jr. (bass), Leo Nocentelli (guitar), and Art Neville (keyboards). Allen Toussaint used The Meters as his studio band, supporting Lee Dorsey on “Ride Your Pony” and “Working in the Coal Mine. By 1969, The Meters were doing their own thing with “Sophisticated Cissy” and “Cissy Strut.” In addition to Weather, you’ll hear the band’s “Zony Mash” and “Stretch Your Rubber Band.” You’ll also hear Eddie Bo with an extended version of his big hit “Hook and Sling.”

It’s all about the groove. Thanks for tuning in.

Shamarr Allen’s New Orleans anthem “Party All Night” starts off today’s show and I follow it with some jazzy numbers that feature strong sousaphone and trombone performances. You can hear it all by clicking the sideways triangle below and you’ll still be able read on.

Matt Perrine sneaks another surprise run on the sousaphone hitting high notes that don’t even sound like a tuba in “Devil Take It’ to start the first full set. Ben Jaffe also represents himself well on the big horn in Preservation Hall Jazz Band’s take off “Bonjour Cousin.” The set finishes with “The Object of My Affection” by Frog and Henry. Both Frog and Henry and Shamarr Allen will be playing in venues along the I-5 corridor in August (calendar)

I spin a couple of classic funk songs from New Orleans: “Hip Drop” by the Explosions and “Dap Walk” by Ernie and the Top Notes. Trombone Shorty finishes that set and then I play another jazz set that features trombonist Charlie Halloran, Tuba Skinny and Dr. John.

Then its time to celebrate Little Freddie King’s 79th birthday with two numbers that highlight his guitar work. Marcia Ball lightens up that set with her song about the town gossip “Louella.” Lots more follows but by now, you’re probably into it enough to stay listening. I hope you’ll consider subscribing as well (top right hand side of page). Thanks for tuning in.

Champion Jack Dupree and Sam Williams couldn’t be more different in their style of music but they hold a common ground as dear to them as it is to my show: New Orleans. And I feature knock out JazzFest performances by both of them in this week’s show. Go ahead get it started.

Big Sam of Big Sam’s Funky Nation kicked off his 2010 New Orleans Jazz and Heritage Festival performance with a nearly 12-minute song he titled “Play Them Funky Horns” a mash up of songs that even includes a few bars of “Liza Jane.” It’s a nice preview for his upcoming performance in Portland (Mississippi Studios) and Seattle (Tractor Tavern) next week. That song kicks off the first full set on this show and will get you moving — guaranteed.

Twenty festivals previously, in 1990, Champion Jack Dupree sat on the stage — his first return to New Orleans in over 30 years of living in Europe — with a master of ceremonies Allen Toussaint — whose job was to interview the long-missed expatriate — one of the few remaining original barrelhouse piano maestros. During a soulful number called “Bring Me Flowers While I’m Living,” Dupree is joined by a Toussaint who lays in on the high side of the keys some pretty flourishes.

The duo continue through that song and into a boogie woogie number that ended with Dupree (80 plus years old at that time) getting up demonstrating is own boogie woogie moves that included some incredible abdominal exertions. The performances has been available in video online for years and this year the Smithsonian Folkways included the performance in its five-disk retrospective in honor of the 50th annual JazzFest. You’ll find that song in the second hour of the show.

Check out whose playing the Northwest this summer here.

This week’s show is a funky one.  Get the show started by clicking the Mixcloud arrow then read how Ohio scooped New Orleans on the funk 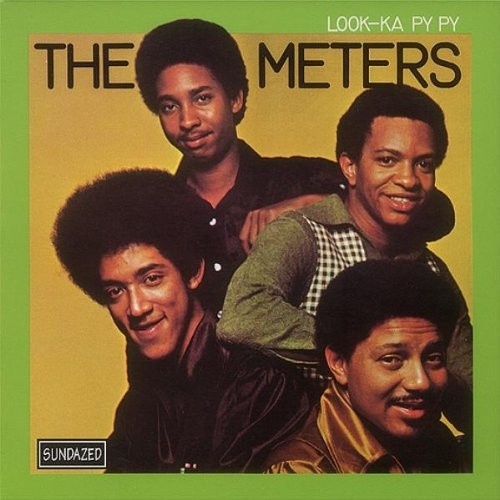 A recent NPR story about Dayton, Ohio having a Funk Hall of Fame took me a bit by surprise.  It’s not that I have anything against Ohio though I resent the tendency of their vote for president seeming to count more than mine. And yes, there are some fine funk bands from Dayton (Ohio Players, Heatwave, Zapp, etc.).

Like many though, when I think of funk masters, I think James Brown, George Clinton and, well, The Meters.  In the late 60’s, Art Neville (keyboards), George Porter, Jr. (bass), Leo Nocentelli (guitar) and Zigaboo Modeliste (drums) became the studio band for Allen Toussaint backing hits like “Everything I Do Gohn Be Funky,” sung by Lee Dorsey. And while they didn’t make it as big as some of the mid-70 funk bands, The Meters, along with James Brown, are widely considered to be the originators of the funk sound.

But its not that simple.  The Meters were influenced by New Orleans parade rhythms, Professor Longhair,  and Earl Palmer, who before moving to Los Angles to be part of the famed “Wrecking Crew,” was part of the Cosimo Matassa studio band that created many of the early R&B hits by Fats Domino and Little Richard.  The same Little Richard sound that James Brown cited as being an influence on his funk sound.

So why isn’t the Funk Hall of Fame in New Orleans?  Probably for the same reason there’s not a decent Jazz or R&B museum in New Orleans. Dayton made it happen and New Orleans didn’t.   Well, least the music is good. Other acts on this show include Corey Henry, Galactic, Johnny Sketch and the Dirty Notes, Dr. John, Eddie Bo, New Orleans Nightcrawlers, Jon Cleary, Papa Grows Funk and Walter “Wolfman” Washington.