Jon Cleary brings a unique version of the New Orleans sound to the Northwest, steeped in tradition and yet wholly fresh, when he performs at Dimitriou’s Jazz Alley in Seattle this Monday, February 8. 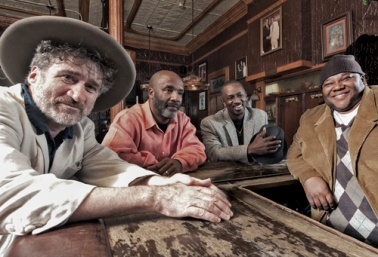 Cleary’s latest album, GoGo Juice, has been nominated for this year’s Best Regional Roots Grammy. A native of England, he’s lived all of his adult life in New Orleans — a city he chose after falling in love with New Orleans R&B and funk at a tender age. Now, at 53,  he has firmly rooted himself as a New Orleans piano “professor,” a true practitioner of the New Orleans sound who has broken fresh ground with new compositions and arrangements.

He’ll be backed by the Absolute Monster Gentlemen which includes Jeffery “Jellybean” Alexander on drums, Derwin”Big D” Perkins on guitar and Cornell Williams on bass. If you followed the HBO series Treme, you’ll recognize Cornell Williams who helps a band mate break his drug addiction by putting him on his uncle’s shrimp boat.

In his performance, Cleary will draw from his library of eight albums, including a well-regarded tribute to Allen Toussaint called “Occapella.” Even when he’s not doing Toussaint, he and the Absolute Monster Gentlemen seem totally capable of cleverly funking it up with great lyrics and an awesome groove.  Here’s a taste.